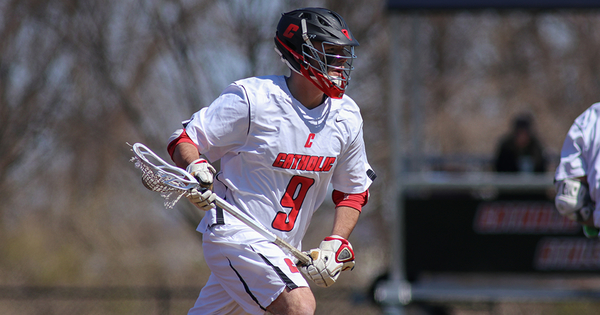 Join the Catholic University Cardinals Men’s Lacrosse Prospect Day Camp and train like a champ. This event is inviting all high school male lacrosse players who desire to take their game to the college level. It is going to run from 10:00 AM until 3:30 PM on the 23rd of July. This training program is going to take place at the state of the art Cardinals Stadium turf. Furthermore, this lacrosse camp emphasizes improvement in the participant’s overall skills and game concepts understanding. There will also be a campus and a college recruitment talk. The camp registration fee is $125.00 per camper. In addition, this lacrosse camp will provide an opportunity to experience a collegiate level training atmosphere with a collegiate lacrosse champion team.

Brooks Singer is the head coach of the Catholic University Cardinals men’s lacrosse team. He is an alumnus of the Catholic University. It is also where he earned his master’s degree. Coach Brooks Singer is now in his 20th year at the helm of the Cardinals men’s lacrosse program. Ultimately, under his leadership, the Cardinals has already two Landmark Conference Championships, a feat done consecutively in 2015 and 2016. At the same time, Coach Brooks Singer is the director of the Catholic University of America’s Capitol Lacrosse Camp. The Cardinals assistant coaches are Tommy Minkler, Joe Carlini, Brian Sheridan, Chris Hamilton, and Mo Lanzas. Coach Tommy Minkler is an alumnus of the Ohio Wesleyan University. He is now in his second season with the coaching staff. Coach Tommy Minkler is also the team’s strength and conditioning coach and recruiting coordinator. Then, Coach Joe Carlini is a bachelor’s degree in political science major with a minor in entrepreneurship and management graduate from Johns Hopkins University. He is also a Masters of Science in Business Analysis program graduate from Catholic University.

Service Type
Lacrosse Recruiting Camps
Provider Name
Catholic University,
Area
Washington, DC
Description
The Catholic University Cardinals Men's Lacrosse Prospect Day Camp will provide the participant a feel for how it is like to train and compete at the college level. It also provides an opportunity for players to showcase their exceptional skills and gain the recognition of the university's men's lacrosse coaching staff. This program will fall on the 23rd of July.
Total Page Visits: 285 - Today Page Visits: 1