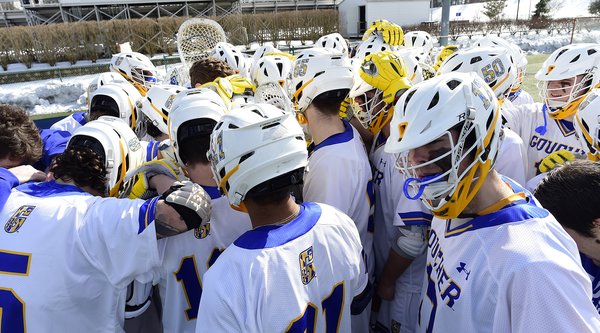 The Goucher College Gophers Men’s Youth Lacrosse Clinic is open to all boys and girls 4 to 13 years of age at any skill level. This lacrosse training program will run from 6:00 PM until 8:00 PM on the 10th of November. All the instructions and groupings will be according to the participant’s age and skill level. Furthermore, this youth lacrosse clinic is an initiative of the Goucher College Gophers men’s lacrosse coaching staff. It is going to take place at the state-of-the-art Beldon Field which is on the Goucher College campus. The training program emphasizes individual skills development and lacrosse game knowledge improvement. Moreover, the clinic registration fee is $25 per camper. It is going to be a fun and motivational training experience.

Goucher College, originally Women’s College of Baltimore City, is a private, coeducation, liberal arts college in Baltimore, Maryland. It is offering 33 majors and 5 master’s programs. Currently, the academic institution is serving around 1,500 undergraduate students and around 1,200 postgraduate students. 32 percent of this undergraduate student population are male students and 68 percent are female students. This undergraduate student population is also through a selective enrollment acceptance rate of 79 percent. Meanwhile, the college’s student to faculty ratio is 10:1. Goucher College has an accreditation from the Middle States Commission on Higher Education. It also one of the nation’s best academic institutions. As a matter of fact, Goucher College is 112th in the National Liberal Arts Colleges category of the 2018 edition of the US News and World Reports Best Colleges rankings. It is also 86th in Best Value Schools rankings and 71st in the High School Counselor Rankings. In athletics, Goucher College fields 21 intercollegiate men’s and women’s sports teams in the Landmark Conference of the National Collegiate Athletic Association (NCAA) Division III. Goucher College was competing at the Capital Athletic Conference (CAC) before its transition to the Landmark Conference. The athletics nickname is Gophers and the athletics identity colors are blue and gold.

Leading the Goucher College Gophers men’s lacrosse team is Head Coach Brian Kelly. Coach Brian Kelly is a bachelor’s degree in social and behavioral sciences graduate from Johns Hopkins University. He is now in his sixth year with the coaching staff, five years as the assistant coach and now as the head coach. Additionally, Coach Brian Kelly, in just his first two seasons at the head coaching role already led the Gophers men’s lacrosse team into two Landmark Conference playoff berths. Coach Brian Kelly is also a college lacrosse standout player himself. In fact, he is an inductee into the National Junior College Athletic Association (NJCAA) Lacrosse Hall of Fame. Then, the Gophers men’s lacrosse assistant coach is Mike Nugent. Coach Mike Nugent is at the same time the team’s defensive coordinator. He is in his first season with the coaching staff. Coach Mike Nugent, a native of Rancho Cucamonga, California, is a Mercer University graduate. He was a goalie and a three-time All-Conference selection during his college playing years. Finally, Conner Annunziato is the team’s graduate assistant coach and assistant offensive coordinator. Coach Connor Annunziato, a native of West Chester, Pennsylvania, is a bachelor’s degree in education graduate from Goucher College.

Service Type
Lacrosse Recruiting Camps
Provider Name
Goucher College,
Area
Baltimore, MD
Description
The Goucher College Gophers Men's Youth Lacrosse Clinic will provide a fun and motivational training program for both boys and girls 4 to 13 years of age. It will run from 6:00 PM to 8:00 PM on the 10th of November at the leading-edge Beldon Field on the Goucher College campus. The clinic registration is on a first come first served basis.
Total Page Visits: 160 - Today Page Visits: 1