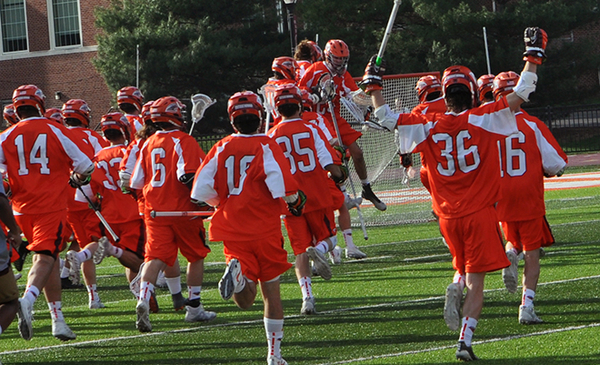 The Susquehanna University River Hawks Men’s Lacrosse Summer Camp is a four-day event that will run from June 4 until June 7. It is inviting all and any boys in grade 2 up to grade 11 who are looking to improve their lacrosse skills in a fun training atmosphere. This lacrosse summer camp is going to take place at the beautiful Susquehanna University campus. Moreover, the training program will cover individual skills drills, position work, station work, and mini games. This four-day training program will maintain a 10:1 camper to staff ratio to ensure personalized coaching to every participant. The registration fee which includes lunch is $225 per camper. Furthermore, the program is requiring the participants to bring their own lacrosse stick, gloves, elbow pads, shoulder pads, helmet, mouthpiece, and cleats. Groupings and instructions will be according to the attendee’s age and skill level.

Susquehanna University is a private, coeducational, Lutheran, liberal arts university in Selinsgrove, Pennsylvania. Its founder is the late Benjamin Kurtz, a German-American Lutheran pastor, and theologian. The university has a 325 acre, rural type campus. Currently, Susquehanna University is accommodating around 2,200 undergraduate students. This is with an acceptance rate of 68 percent. And, the student to faculty ratio is 12:1. The university has a gender distribution of 44 percent male students and 56 percent female students. Furthermore, the university is 141st in National Liberal Arts Colleges category of the  2018 edition of the US News and World Reports Best Colleges rankings. It is also 381st in the Business Programs rankings. It is an affiliation of the Evangelical Lutheran Church in America. Susquehanna University has 23 men’s and women’s college sports teams competing in the Landmark Conference of the National Collegiate Athletic Association Division III. They are the River Hawks and their identity colors are maroon and orange. They are formerly known as the Crusaders. The university’s football team and women’s golf team are competing in the Centennial Conference while it’s men’s golf team is competing in the Empire 8 Conference.

The head coach of the Susquehanna University River Hawks men’s lacrosse team is Stewart Moan. He is at the same time the university’s Director of Athletics Facilities. Coach Stewart Moan is now in his 11th season at the helm of the River Hawks men’s lacrosse program. Additionally, Coach Stewart Moan is an alumnus of Salisbury University. He is also a master’s degree in Recreation Administration graduate from Morgan State University. Ultimately, Coach Moan is a two-time Landmark Conference Coach of the Year awardee. He is also the 2000 Capital Athletic Conference Coach of the Year and the 2005 State University of New York Athletic Conference (SUNYAC) Coach of the Year. Coach Moan is the Chairman of the NCAA DIII Championship Committee. Then, the River Hawks men’s lacrosse assistant coaches are Kyle Gallagher and Mike Burns. Coach Kyle Gallagher is with the River Hawks coaching staff since the 2015 season. He is a bachelor’s degree in interdisciplinary studies (physical education and business administration) graduate from Salisbury University. Coach Kyle Gallagher is the former Widener University lacrosse assistant coach. On the other hand Coach Mike Burns is a bachelor’s degree in child development and psychology graduate from Whittier College.