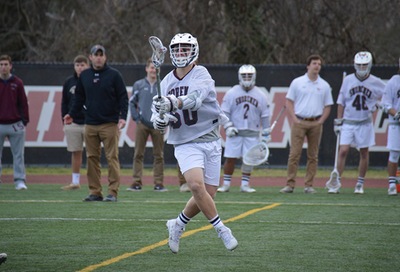 The Washington College Shoremen’s Lacrosse Elite Prospect Camp is a fast-paced and advanced training program for high school boys who desire to take their game to the next level. It will fall on the 17th of June at the beautiful Washington College campus. This training program includes offensive and defensive work, station, stick work, competitive games, campus tour, and a college recruiting discussion. Furthermore, the program will provide exceptional lacrosse players an opportunity to showcase their skills in front of the Washington College men’s lacrosse coaching staff. Available spots are limited thus registration is on a first come first served basis. In addition, the participants need to bring their own lacrosse stick, goggles, mouth guard, cleats/sneakers, and water bottle. Overall, this training program will be a physically demanding but fun and motivational experience.

The head coach of the Washington College Shoremen’s lacrosse team is Jeff Shirk, a native of Mountain Lakes, New Jersey. He is now in his eighth year at the helm of the college’s men’s lacrosse program. Coach Jeff Shirk is a bachelor’s degree in elementary education graduate from the University of Maryland. Ultimately, Coach Jeff Shirk is a two-time Centennial Conference Coach of the Year awardee. He is also the 2014 NCAA Division III Men’s Lacrosse Coach of the Year. Under his leadership, the Shoremen’s lacrosse team have their first-ever NCAA Division III Tournament appearance. The team also won their first Centennial Conference Championship since 2003. Then, the Shoremen lacrosse senior assistant coach is Bennett Cord. Coach Bennett Cord is an alumnus of the Washington College with a degree in history. He is entering his second season with the Shoremen coaching staff. He is the former Shenandoah University assistant coach and recruiting coordinator. Moreover, the team’s assistant coaches are Tim Kerr and Nick Triano. And finally, Adam Roth is the team manager.